​
Abstract
Starting from Dadaism the classic terms could no longer define the new forms of art specific to Land-Art. The social, environmental, moral, ethnic problems reach the art.
The art falls from the pedestal and expresses itself in under-privileged places from the social and natural point of view. We speak a lot about the need of an artistic education based on expressiveness and creativity.
Do these principles of subjective development apply in visual contemporary education? What is the proportion between the practical courses focused on observation, manual skills, study and the courses that induce interpretation, expressiveness and creativity in the art academies?
Artistic examples support the idea of an art in which the role of concept is more and more important to the disadvantage of artisan craft.

Visual arts are permanently preoccupied with the renewal of means of expression.
The intertwining of the areas of temporal arts led in the visual arts to the renouncement to illustrative, to the real or imaginary object as reason of creation.
We resort only to dot, line, color, volume and space as plastic semantics. The goals are high, human, social, and environmentally-friendly.

​2. Renewal of means of expression in contemporary artistic education

Specialized literature [1] analyzes the process of transcending contemporary arts. The painting does not satisfy with the bi-dimensional surface of the canvas. After it surmounted the illusionist showing stage of the spatial perspective, the painting aims to conquer the space.
​ 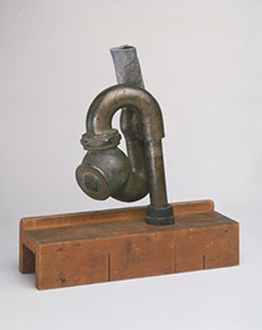 ​​
At the moment when the painters gave up the traditional means such as brushes, tube colors, prepared canvases and by collage moved on to a true occupation of the space, not just a figuration of the space, they reached a new stage of appreciation and study of the expression resources that visual arts hide. So it can say about collage that it lay at the origin of different techniques of visual representation of the space, which do not belong to painting or sculpture and have the tendency to express themselves by using objects in the space and not represent only the used objects. It took time for Dadaist ideas and avant-garde objects to be correlated to other artistic conceptions so that new artistic trends like Land-Art crystallize.
​
​
Dadaists create, on the basis of collage, on the fertility of hazard, abstract objects and reliefs whose artistic interest is incontestably reached by the humblest means: they reunite fragments of objects thrown to the garbage.
The drama of instability and degradation of moral and cultural values is widely felt by the intellectuals of this period. The violent protest, the pathetic and undifferentiated negation has fast created a special echo so far.
​ 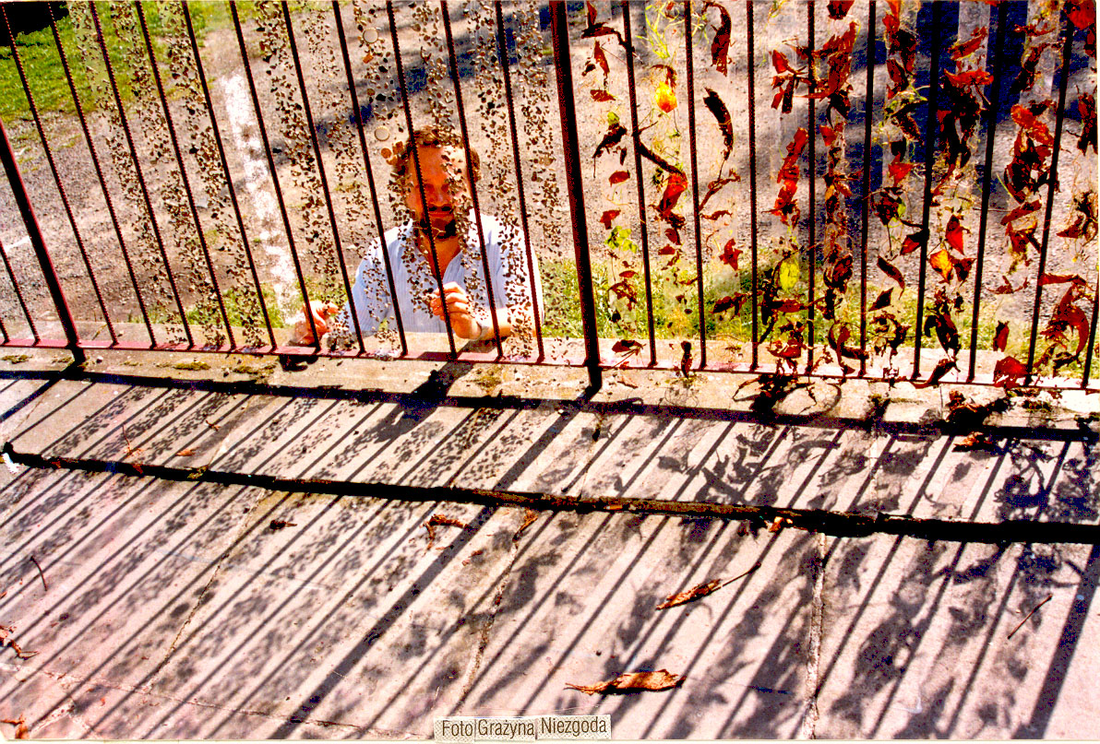 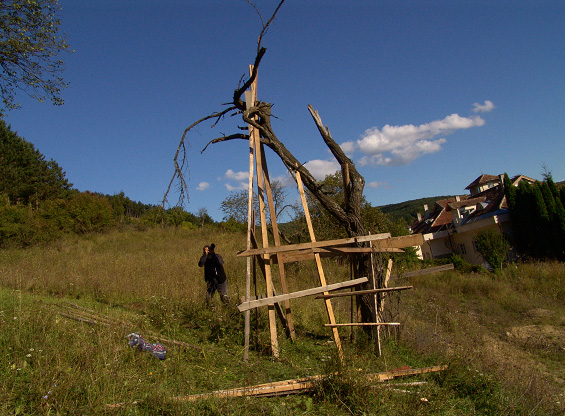 Dobriban, E., 2006,  Restoration, wooden planks, dry tree. International Land Art Workshop, Cluj N.
The classic terms could not define these new forms of art specific to Land-Art. Painting or sculpture no longer characterized works in which they associated the paper with plastic sheets, glass tubes with vegetal fragments, skin, rocks, etc. It is clear that in this period they moved from the tyranny of the painting to the freedom of the object[1]
In education and creative work at university level, more specifically at the practical courses, a search should be made permanent for renewal of means of expression and forms of artistic manifestation. The students of the Art University will be required to consider to devoted their own body and soul to the innovating movements in art. Alone or together with others should be directed to create and executed installations and Happenings for a very limited and interested group of people.
In a succinct look at the level of artistic environment of Cluj Napoca, in the ’89s we do not notice a great receptiveness to the innovating ideas of contemporary artists. Even the youngest graduates looked doubtfully at the force of plastic expression of the installation, Land-Art and Happening. At University of Art of Cluj this method of creation was not appreciated in the ’89s at its real value, as a proof, today there is no Land art department just some courses specialized in Visual Three-dimensional Structures.
Some teachers, being convinced by the practical need of transcending homogenous media, will try as pedagogues to instill in their students confidence in using the mixed media
of expression. In this context, they have already carried out several actions at some courses as well as in the course Visual three-dimensional structures. So far, most of them combine the media of visual arts with the spatial temporal media.
Today in prestigious galleries there are more and more works of art in which the role of technique, of the artistic craft of the artisan is lesser. What matters now is the conception.  With the aid of artistic concept, the esthetic message is sent, not by an artistic academic craft polished along tens of years of creative
experience of a master. In the name of the same conceptual art we can transcend the territories of arts that not long ago were immutable.

The conviction in the need of profound study in the creative research in the area of transcending homogenous media it strengthened when the teacher understood that for an artist, the lack of the craft, of the handicraft must not be mistaken for the lack of possibilities of artistic communication. On the contrary, the mastery of the craft can lead us to the superficial, to decorative style, to the exaggeration of form compared to content, and in this case to the exacerbation of immanence compared to transcending.

Some students wanted to create Visual Arts but did not have notions of visual language. The teacher became aware that they did not have the time or patience or interest to discover the secrets of visual communication with that point-line-dot academic traditional system.
Students, 2010, UAD, Department of Art Pedagogy, Cluj-Napoca,  Working  at Course Three-dimensional plastic structures, plastic, glass [left] and iron, glass [right], foto Comşa, A.
Installations that can be used by students as models for future large Land Art creations inopen space.

Therefore, the teacher should naturally direct students towards the area of mixed visual arts and proposed them a work with a practical completion in an installation without title, the type of Land-Art.
It is possible to consider that this approach reached its goal, it was a first initiation for the students about the way they can approach the controversial area of visual art of avant-garde.
The installation that naturally and without interest resulted we think that it had in itself a certain visual message – even for a newcomer looker on the spot, deprived of other information than the spatial and visual information offered by the finished installation.
It had in itself a certain visual message because, even if the whole action and all its objects they took them from the day-to-day life, the students kept a sufficient esthetic detachment from the real, without practical completion in the meaning of the practical purpose for which those objects and human actions would have been conceived.


3. Conclusion
​
In general, an artistic action with achievement of transcending its own immanent medium is kept within the limits of artistic valences as long as it avoids the danger of falling crassly in the day-to-day life. This could be the basic idea of the Land-Art current.
By the act of selecting the object from the field of trivial reality, the artist invests it with artistic quality, by the negative, challenging and ironical approach of him. The object becomes carrier of a meaning, a message, and an idea.
Future, in the specialized academic training, at Land-Art Department will be useful to exploit in detail the resources of the art successive transcending, so that the experimental area has concretization and clear delimitations as an artist referred to it when he said that he wanted to make an art like the one in the museums, but actually he did vanguard.

This communication was held in public session at the 6th International Conference on Interdisciplinarity in Education, April 14-16, 2011, Safranbolu University, Karabuk, Turkey.