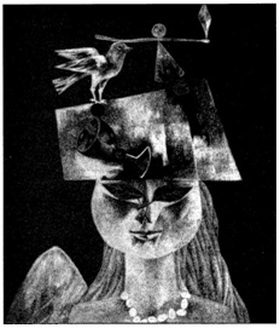 Painting by László Sipos
​
The history of surrealism is well known, but what happened in Central and Eastern Europe, more precisely in Transylvania?

Rene Passeron's „A szürrealizmus enciklopédiája" (The Encyclopedia of Surrealism) ends with Otto Mezei's epilogue entitled „Szürrealizmus és szürrealista látásmód a magyar művészetben" (Surrealism and Surrealistic Way of Seeing in the Hungarian Art). There is no doubt, he writes, that surrealism based on Breton's principles didn't exist in the Hungarian art between the world wars and after, neither as movement, nor as artistic guiding line. However, we certainly can identify surrealistic way of seeing in the art of many Hungarian creators. This „másodlagos szürrealizmus", secondary surrealism could be analysed not just as an occasional characteristic, but as a parallel series of phenomena to the original movement'.

Looking for the beginnings, for the very beginnings of surrealism, in the development of the individual we shall find... the drawings of the children. Concerning the development, the local history of little communities, we shall find the local traditions, the folklore. And concerning the human presence on the Earth, we shall find the beginnings in the „childhood of humanity" — the myths, the legends, the folktales, respectively the ancient paintings and drawings in the caves are a very rich world of surrealism. In a few sentences, we have to follow its history from the origins of human culture and civilization itself. The human cognition, the process of comprehension itself is of surrealistic nature.

Therefore the year 1924 wasn't the beginning, the 20-th century, Breton's text was rather a start of self-reflection, the 20-th century, the avantgarde began to be able to rationalize and organize this eternal creative energy. Therefore after 1966, after the death of Breton and Giacometti, the main organizers, surrealism, of course, survived2. Maybe in atomized forms, but it survived. With Salvador Dali till 1989, and in the creation of every artist it exists also today.

In Transylvania the MIENK, the Magyar Impresszionisták és Naturalisták Köre (The Circle of Hungarian Impressionists and Naturalists) is the parallel to the organized surrealism3. Hugo Mund, David Jandi, Eugen Pascu/Jenó Pászk, Nándor Gallas, Jozsef Klein, Alex Leon, Hans Mattis-Teutsch, Vilmos Perlrott, Lajos Tihanyi, Béla Uitz — in many artworks by them exhibited with this conference, in their landscapes and compositions beside, beyond their impressionism we can identify a visionary character.

Today... The careers of Ferenc Incze, Ilona Tóth, Albert Györkös Mányi, Levente Fodor and István Orth are to be considered in Transylvanian art of the last decades. And we shall find many careers, where surrealism is one basic component of their artistic way of seeing. In Cluj/Kolozsvar for instance Lászlo Sipos.

Is it a game? At last, also the evil violonist of the „Szóló szonáta" (Solo Sonata) is playing...

László Sipos is building in his compositions spaces, where the simplest, everyday objects, hammers, bottles, needles, chains become dancers of a drama, circus. The symbolist poet Endre Ady played, visualized the melody of life with a black piano, Laszló Sipos is following the march, the games, the dance macabre of personalized objects. The process how they are building a larger system. These paintings, drawings are „loud" pictures, and are effective not just because of the sound of the objects. „In his pictures the idea as vision affects the spectator" wrote Júlia Szilágyi4. Laszló Sipos' painting, drawing describes a whole story, the story of the wonder's birth — who is this man?

Concerning the map of Transylvanian art, Sipos represents the school from Cluj/Kolozsvár. About the characteristics of this school let's tell now in brief that its activity is based on the intellectualized respect of the old traditions. Sipos' artworks are Transylvanian actualizations of the best traditions of the modem art — Transylvanian Hungarian subjects in an avantgarde actualization with the means of expressionism, cubism and all above surrealism. The characteristics of representation and/or expression are a synthesis between European way of seeing and local kalotaszegian, székely and csángó folk art. His symbolic objects, his figures — the clown, the scientist, the soldier — are well known from the art of the 20-th century, however, the painter found original ways for their renewal. The clown's mouth is closed with a zipper, the general's head is a clock, He represents a cruel world, like Kafka did.

Paper airplane, scissor, bottles, chains — all these are visualizing ways of searching for spiritual ways into the reality. In their metamorphosis the creator is building up a human like order, a reality of higher rank. At first the sound of plastic or glass drums, after that follows the army of the strings. A chaotic atmosphere? The art of noise of needles and chains? Yes, it is, if this is the melody of life, Béla Bartók's music suggests the same. László Sipos is cool and objective, he is approaching his subjects rationally, from system of symbols of the folklore till the circus, from the responsibility of the scientist till the world of advertisements. He rejects any sentiments, and describes this way a contemporary inhuman world, within the lost human figures — wrote Tünde J. Balog5. He is analysing the relationship between human, mechanic, animalic — culture, civilization, nature — wrote Júlia Szilágyi6. The pictures are based on an epic ground, the artist and after that the receiver — follows the circus of the birth of man in an inhuman informational world. We are following here whole stories, with music, sonatas, concertos, symphonies.

What about the program? It's a game. A dance, d a n s. e m a c a b r e. You need to dance, sir, the music also will appear, from somewhere — said Zorba in Nikos Kazantzakis famous roman. The series „Levelek" (Leafs), „Trombitás a városban" (A Trumpetist in the Town), „Ló álarcban" (Masked Horse), „Pepsis Krisztus" (Christ with Pepsi), „Király, királynő" (The King, the Queen), „Csángo Madonna", the series „Koponyák" (Skulls) these artworks and series are a synthesis of expressionism, cubism, and all this in the games of an eternal surrealistic tradition which is living and is effective from the origins till the contemporary art. The artist makes visible the idea, and the image sends the receiver newer visions, wrote István Angi. Finally the music involved in the paintings has a newer function, it is an organizational force.

In consequence, the self-interpretation of the human existence is of surrealistic character, all we are surrealists, one by one and all together. A reality of higher rank, this is our artwork.